Directed by A. Edward Sutherland; produced by Lee Garmes 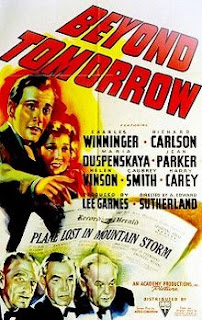 Three bachelors (Charles Winninger, C. Aubrey Smith, Harry Carey), whose Christmas dinner guests cancel at the last minute, decide to invite a pair of strangers to fill the empty chairs. Their fortuitous choices fall upon a couple of young people (Richard Carlson, Jean Lawrence). The latter fall in love, watched over by their benefactors, who don’t even let death halt their protection. 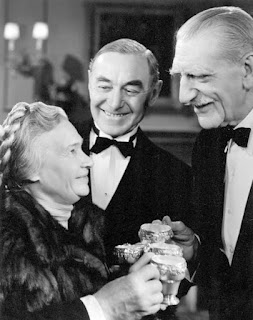 This is an odd film, as may be deduced even by the slim synopsis given above. Supernatural, though not quite a ghost story, it is also partly a romantic drama. The two elements don’t really mesh well, and run almost parallel until the last few minutes. The story was undoubtedly plotted, but moves along so gently that it may as well have been made up as it goes. What happens to the couple, the tribulations they go through, is rather clichéd, and may have been even by the time it was made. That is one of the problems with Beyond Tomorrow: it seems rather naïve – not necessarily a bad thing – and out of place, even in 1940. Its story could have come straight from a silent-era movie, when filmed story-telling was novel. 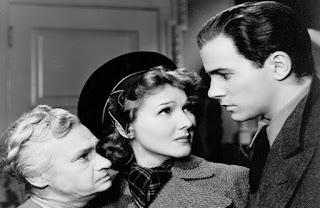 The characters aren’t deeply portrayed. The three old men are more interesting than the two young people, but we are told very little about them. They are engineers in a partnership obviously of long-standing, but how such diverse characters (an Irish American, a former British Indian Army officer, and a hard-bitten mid-westerner) came to meet and form a friendship, we don’t know. Carey was involved in a scandal years before but of what nature, we aren’t told; what occurs to him during the movie suggests that he had a more nefarious part in it than is otherwise implied. Smith’s character is, I think, the most unusual, as he is a man who has lost his son (an air force officer killed in the Great War) but holds no bitterness; his memories are wistful but happy. Such a personality is rare in movies. Their housekeeper (Maria Ouspenskaya) is a former Russian aristocrat; another strange addition. 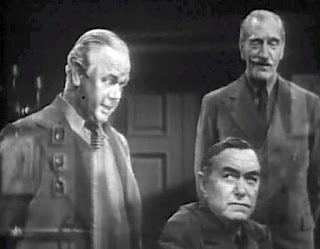 The two lovers are little more than sketches. The man is named Houston, and is from Texas. He sings and eventually secures a career using that talent – though not as a singing cowboy. The woman is a sweet girl who entertains children at an orphanage. The actress looked a great deal like another Jean – Jean Arthur – but, based on this performance, did not have her talent. 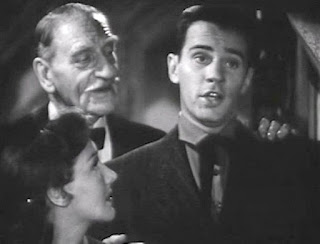 There is no suspense to the story, despite some of the events, and the uncertainty as to what will happen to the trio of gentlemen once they are killed and return as spirits.

Beyond Tomorrow is mildly entertaining and somewhat interesting, but probably won’t hold the attention of most viewers, even for its 84 minutes. Future western character actor Hank Worden can be glimpsed briefly in the hospital scene.
at December 26, 2018 1 comment:

Directed and produced by Tay Garnett 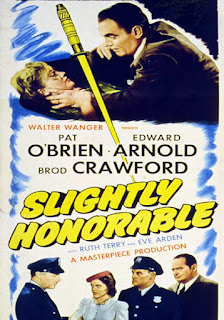 The death of a corrupt highways commissioner focusses attention on an evil political boss (Edward Arnold), who finds himself targeted by a lawyer (Pat O’Brien) and his associate (Broderick Crawford), hired to run interference on a new highways bill. The lawyers’ battle, however, is hindered by murder, romance, blackmail, chicanery - and humour. 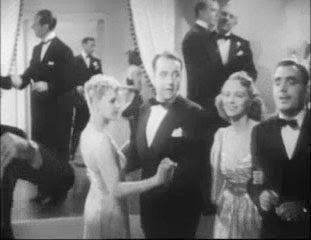 As a comedy / mystery, Slightly Honorable is much more successful as the former than the latter. It owes much to the presence of O’Brien, who was later often relegated to secondary roles, but who shows here that he can easily carry a film. He portrays a man who is smart, attractive to women and slightly shady but with a decent heart. His performance is ably assisted by Crawford, and a host of character actors, including Eve Arden, as a secretary whose incompetence is matched only by her apathy. Evelyn Keyes is seen in a bit part as another secretary. 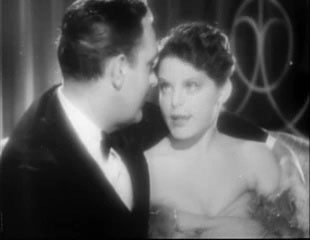 The writing is both snappy and adult, filled with visual and spoken innuendo. The script must have been risqué at the time, and hasn’t moved far from that territory by now. A substantial sub-plot concerns the comic and presumptuous infatuation for O’Brien on the part of an eighteen year old (under-aged in 1939) chorus-girl. O’Brien’s euphemism, uttered whenever the girl unworriedly undresses in front of him, may not have fooled everyone at the time. There is also O’Brien’s reputation for physical rough-stuff with women, called by one character his ‘technique’. While enough to enrage one father, who puts two and two together, the viewer gathers that O’Brien has a much tougher image than he deserves. 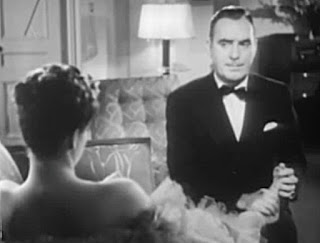 The story, which gave me the impression of being rather more suited to a 1920s setting than a late ‘30s, does not support its mystery well. The murderer’s motives are not plausible and there are virtually no clues as to the identity of the killer. But if viewed as an adventure, rather than a detective story, something that is helf screwball comedy, there are fewer expectations to be disappointed. 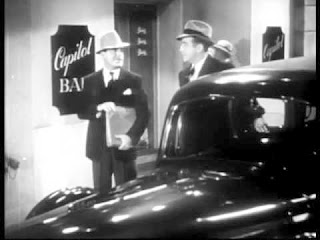 Slightly Honorable is a fun film, a bit of an eyebrow-raiser, even these days, and, though not quite pulling off the combination of comedy, mystery and light-hearted caper it probably hoped to be, is still an entertaining movie.
at December 18, 2018 1 comment: 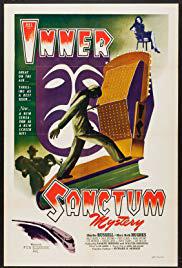 On a train, a mysterious man (Fritz Leiber) strikes up a conversation with a bored passenger (Eve Miller), and tells her a story. It’s about a man (Charles Russell) who accidentally kills his girlfriend. Panicking, he deposits the body on a departing train and hides in a boarding house in a small town, trapped there by a flood. Then, events start to close in on the inadvertent criminal, as he tries to buy time until the flood recedes and he can flee. 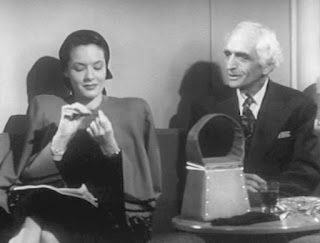 In a vein similar to the popular radio anthology series of the same name, Inner Sanctum may have been appealing as a later 1950s television programme. Unfortunately, this movie would have been one of its less successful episodes. The set-up is interesting with Dr Valonius, a less than creepy (actually rather benevolent) seer, who re-appears in the last couple of minutes (which constitute the best sequence of the film). The other characters are very ordinary. One, a boy (Dale Belding), starts off rather dense but becomes smarter later on, putting together clues in a way that would do justice to a professional detective. 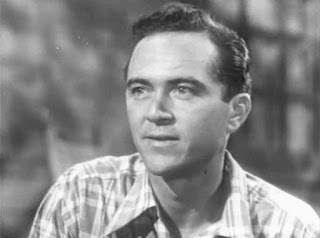 There is some humour, which is at least entertaining, but which is misplaced in the context of the film. The dialogue is good, and the acting is competent. The story is the main culprit. One expects more of a twist to the principal story-line and, though a surprise comes at the end, it doesn’t redeem the bulk of the tale, or the movie in general. I have a suspicion that the ‘book-ends’ to the movie were the justification for the rest of it - a version of a writer or producer thinking a good premise is as satisfactory as having a good plot. The direction is pedestrian and doesn’t help matters. 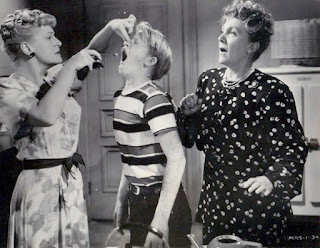 While Inner Sanctum’s actors do a good job, there is nothing really here to hold the viewer after the beginning grabs him.
at December 10, 2018 1 comment: 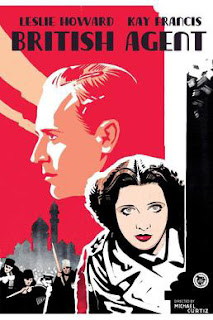 In 1917 Russia, a lone representative of Britain (Leslie Howard) fights two battles, one overt and one clandestine, to keep the new Bolshevik government in the war against Germany and, if that fails, to overthrow it. His task is complicated by his rocky affair with a secretary (Kay Francis) of the Bolsheviks’ Political Committee, a woman who makes no apologies for her loyalty to the Revolution - or for her love for the Englishman. 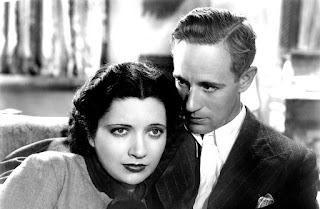 My reaction to this film is probably unique to my movie-watching. I found it intensely interesting - but can give it only a mild recommendation.

First, I will explain the interest. British Agent is a fictionalised account of the true exploits of Robert Bruce Lockhart, as described in his memoirs, a book that I bought and read years ago. (I have a strong interest in early twentieth century espionage.)

Real people are given movie pseudonyms: Lockhart becomes Locke, Sir George Buchanan is Sir Walter Carrister, Kerensky is Kolonoff, Trotsky is easily recognizable as ‘the commissioner for war’, while the head of the Cheka (Bolshevik secret police) holds Dzerzhinsky’s position but looks like Stalin; Lenin is depicted but his name is pronounced Leneen, and the British prime minister is supposed to be Lloyd George but resembles Balfour. 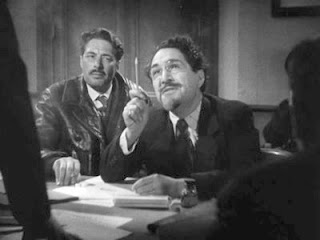 Nevertheless, for a fictionalised version, the events parallel reality very closely, though with some alterations (eg. the sacking of the British Embassy in Petrograd (Saint Petersburg) and the murder of the naval attaché there become the pillage of the consulate in Moscow and the murder of a diplomatic employee.) 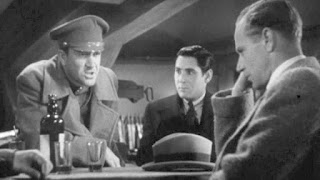 The story is as straightforward a tale of political and intelligence operations as you’ll find; there is no editorialising, no taking sides. Locke is a patriotic Briton trying to keep Russia on his country’s side in a life-or-death struggle against a common enemy, while Elena is a dedicated revolutionary who sees Bolshevism as the answer to man’s ills. The savage nature of the Communist regime is not hidden, nor are the illegal attempts by Locke to oust it. I found this impartiality highly refreshing, and filmed entertainment probably would not see it again until the Reilly tv series, starring Sam Neill. 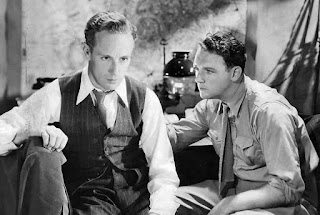 Even so, I cannot strongly recommend British Agent (though it would have an appeal to those devoted to history). I found the romance between the two protagonists to be a distraction. This is ironic, since it was a central feature of the real-life story. Often, in truth, there is no love affair, and it has to be added by Hollywood. Locke is repeatedly played for a fool by his girlfriend and, while this may be realistic, is rather tiresome to watch. As well, the dialogue spoken by the lovers is melodramatic and full of lines that no one but a screenwriter could imagine people uttering. 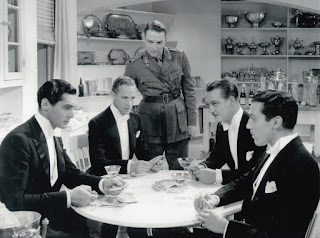 The sudden ending comes via a deus ex machina that definitely is straight out of the world of fiction, and does not reflect real events, which resolved themselves in a rather unsatisfactory way over a lengthy period of time. The fateful decision, made by Lenin, that clears up the problems at the finale was definitely not one which he would have made.

These are not small problems, and hurt the film. But its involving plot, set in a tumultuous and chaotic time, and its clean-cut portrayal of events, give British Agent an attraction to some that is out of proportion to its other qualities. But those who will be pleased with it will, I think, be a minority in its audience.
at December 04, 2018 1 comment: