A merchant marine officer (Scott Brady), whose ship has docked for a few days in London, takes advantage of the opportunity to visit his brother (Paul Erickson). Mystified when he can’t find him, the officer searches, and finds that his sibling has been convicted of murder and is due to be hanged in three days. Convinced of his innocence, the visitor has a short time and few clues to finding the real killer. 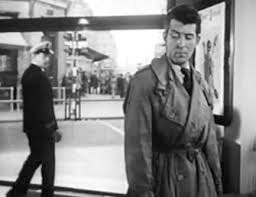 White Fire is an action-packed crime drama, more in keeping with American films of the time than British, though the combination of national cinematic traits is successful. 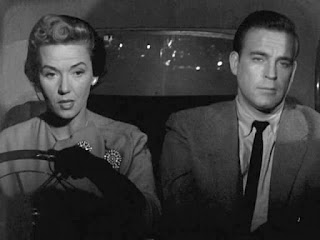 The plot is convoluted, perhaps too much so. Double-crosses abound and few people are what they seem. It is far simpler for the viewer to guess who is not to be trusted than who should be; in this, he is ahead of the hero. The latter freely admits more than once that the goings-on have him ‘buffaloed’. I am sure that at one point people rush to a location of which they could not possibly have been aware. However, like Bogart’s The Big Sleep, which contemporary critics found confusing, White Fire - though not in a Bogart film’s class - is good viewing, regardless of its periodic apathy toward logic. 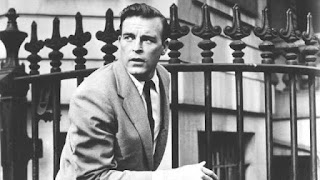 The movie is filled with brawls and beatings, most of which are exhilarating and well-choreographed. The direction is adequate, and the film is well-served by its London locations, making the most of its low budget. 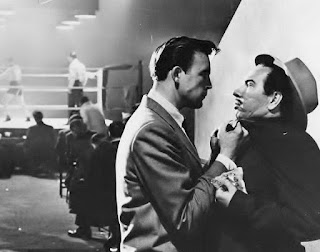 Some of the acting is a bit wooden, the leading lady (Mary Castle) being particularly guilty of this; she was likely cast less for her thespian ability than for her resemblance of Rita Hayworth. Brady, however, makes a convincingly determined hero, two-fisted and brawny, in over his head but cynically unrelenting in his quest for justice. 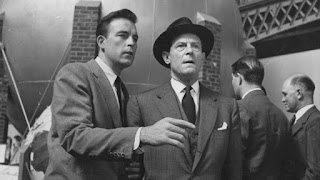 A few of White Fire’s twists and surprises must have been thrown in by writers carried away with their story-line, but implausibility doesn’t stand in the way of a fun time with this movie. Add enough action to satisfy tough-guy viewers, and the film is fast-paced, successful adventure.
at February 25, 2019 No comments: 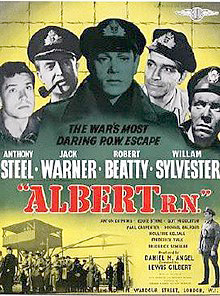 Constant escape attempts from Marlag-O, a German prison camp for captured Allied naval officers, have been frustrated by the security and watchfulness of the guards and the intelligence of the commandant. Now, one of the prisoners (Anthony Steel) has come up with an intriguing plan. Why break through or under the wire fences when once a week, the prisoners were taken outside? He conceives of an idea to escape during the weekly trip to the bath-house, just beyond the grounds of the camp. It involves fake identity papers, women’s clothes, reliance on routine - and a realistic dummy, named Albert. 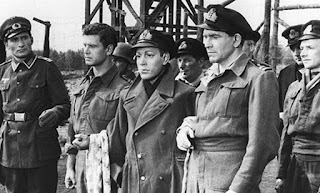 There have been many entries in the prison-escape genre; many were produced in the wake of the Second World War, especially in Britain, when the memory of genuine exploits were fresh. Some of the most thrilling and interesting were based on reality. Albert, R.N. is one such story. As with many, fact is often less credible than fiction: if the idea of passing off an immobile mannequin as a prisoner, under the eyes of notoriously vigilant sentries, were attempted in a work of make-believe, it would be laughable. Yet it was attempted. 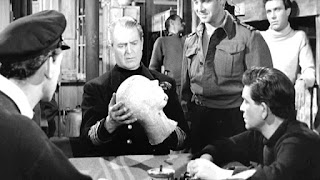 Albert, R.N. has some fictional elements, certainly, but they are successfully integrated into the true story - or perhaps the integration was the other way around. In any case, the drama between the prisoners, and within the men themselves, works. The oft-used gimmick of a group of odd-balls is eschewed for realism in the characters. They are certainly diverse, but not unreasonably so. 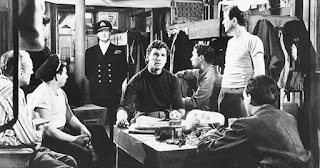 The acting is uniformly good, headed by Jack Warner, already a veteran performer, as the senior prisoner-officer. The direction is also effective, and gives several tense scenes (such as the unexpected search of the prisoners’ quarters), when even the security of being portrayed by a top-billed actor doesn’t mean a character is out of danger. The running time, 88 minutes, doesn’t leave much room for diversion; indeed, we are pitched directly into the plan. It also means that the detail found in other escape films (eg. The Great Escape, The Password is Courage) is left out. Nonetheless, there is education in the entertainment, such as when we learn that ‘the room’ (the barrack in which a handful of prisoners live) sometimes has a man’s greater loyalty than the camp as a whole. 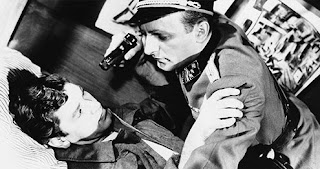 Stressing the small-scale endeavour, the fears and hopes of individuals, Albert, R.N. provides an interesting and, at times, exciting look into the ingenuity, improvisation and humour with which captured officers in the Second World War coped with their incarceration - and sometimes used to escape it.
at February 19, 2019 2 comments: 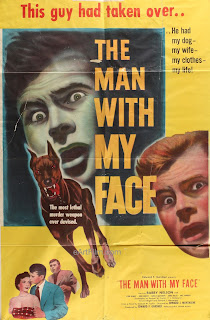 An accountant (Barry Nelson) has his usual Wednesday. He wakes up, has breakfast, pats his dog and drives in to work. His wife is to collect him at the end of the day, but she doesn’t show up. Calling home, he’s treated as a stranger. When he at last gets there, he discovers why: a look-alike has taken not only his place but his identity - and his wife and brother-in-law believe the real man is the imposter. 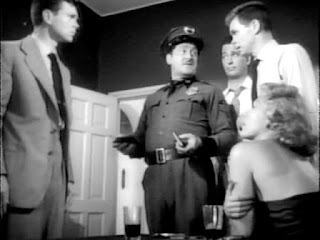 This is the intriguing premise of The Man with My Face, its opening eerily reminiscent of a Twilight Zone episode. The film’s explanation, however, is not supernatural, but felonious, and is given to the viewer almost immediately (so I am ruining no suspense by elaborating it in part here). Nelson’s replacement in his life is part of a long-planned robbery scheme, the robber hoping to supplant an innocent victim and fob him off on authorities as the criminal police are seeking. 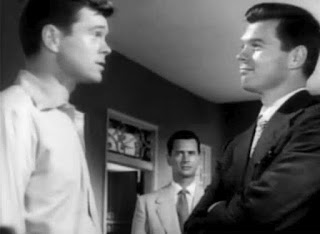 The plot is very implausible, involving a fake marriage, killer dogs and five years of waiting for the right moment. Superficially simple, the scheme has far too many hazards to be likely. As odd as it may seem, however, this does not make The Man with My Face a bad movie. The trick is to accept that the criminals’ conspiracy could work, and then just to run with Nelson as he seeks not to clear his name, but to get it back. 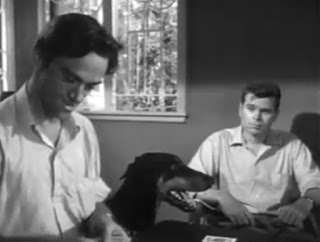 The acting ranges from good to bad, and the production values are cheap. But the movie benefits from the setting, a rare use of Puerto Rico in a feature film; the climax is set in the old Spanish fortress guarding the harbour (a setting which is probably no longer open to anyone and his dog who wants to run through it.) The actual conclusion is satisfyingly ironic. 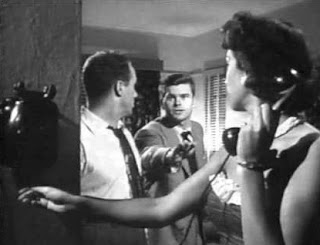 There could be many improvements. The script not giving the game away so early would have made the movie much more suspenseful, and drawn the viewer in, keeping him interested, if only to find out the explanation for the imposture. The actors are largely unknown (and likely were at the time, too) except for Nelson and a young Jack Warden, and in some cases, the players were unknown for an obvious reason. But Nelson does a fine job in his dual role, and the script, despite its flaws, receives high marks for allowing people who know the two men well to differentiate them after a moment, as would likely be the case in real-life.

While The Man with My Face might have the viewer rolling his eyes in disbelief, it nonetheless manages to provide an entertaining time, and that’s what many ask of a movie.
at February 11, 2019 6 comments: 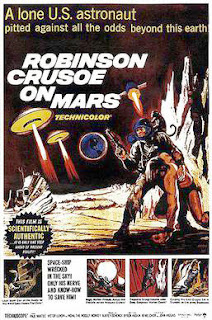 A manned mission to research the gravity of Mars goes awry when its spacecraft is forced closer to the Red Planet than planned, and becomes trapped in its pull. Abandoning their ship, the two astronauts escape separately. After a harsh landing, one (Paul Mantee) survives, but finds that his comrade (Adam West) has been killed. Now, the lone human on Mars must survive to be rescued. 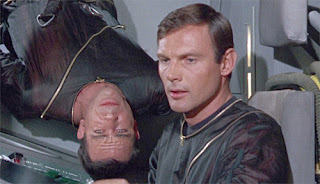 I remember seeing this film as a child, and all I remembered were the alien spaceships. Watching it again as an adult, I was impressed by the intelligence of the script and the capability, if not excellence, of the acting. Robinson Crusoe on Mars is not a film for those who think Independence Day is a fun time with extraterrestrials. It is much more in the vein of The Martian (or vice versa). Deliberately paced, it takes the time to build the situation and to let it sink in with the viewer. 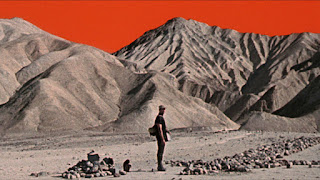 Mantee’s character is smart but human. He struggles with finding air to breathe and food to eat, but also with loneliness. His observation on that topic (intimating that isolation training on Earth was unrealistic because he always knew he would eventually come out and see people again) is smart, and fairly typical of the script. The story takes a turn toward more fictional science half-way through, but the twist does not come out of nowhere, and, considering the movie’s title, makes sense. 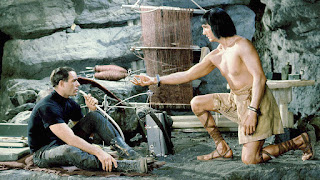 The direction makes very good use of locations. The barrenness of the environment and its inhospitality are accentuated by the vivid background scenes.

The technology, both in the film-making, and in the fictional universe the movie creates, is, admittedly, primitive. Budget restraints were no doubt responsible for the Earth spaceship being no more than a drawing, a cartoon. The portrayal of the alien spaceships, however, lends a startling aspect to their appearance. Their sudden movements, completely undisturbed by inertia, are a contrast to the equally unnerving but prowling motions of the alien vessels in 1953’s The War of the Worlds. 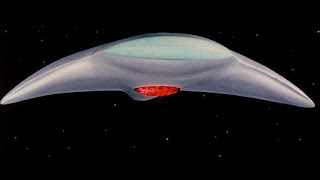 Robinson Crusoe on Mars wisely, I think, ignores the possibilities of futuristic technology, and treats the expedition to another planet as if it were taking place in 1964, the year the movie was produced. Thus, though interplanetary ships exist, reel-to-reel tapes are used, and computers are not mentioned.

Robinson Crusoe on Mars was made at an unfortunate juncture in science fiction. It belongs to the ‘golden age’ of that genre, which ended with the 1950s, a time prior to the real Space Age, when so much that was hypothesized about space travel and other planets was either confirmed or denied. It may be enjoyed more if viewed as a filmed version of a 1950s novel, a story with more wonder at exploration and discovery than what would come later.
at February 05, 2019 4 comments: