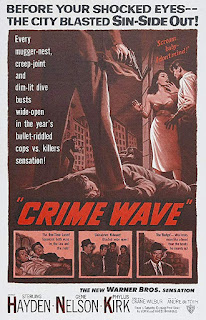 In the aftermath of a violent gasoline station robbery, one of the three perpetrators (Ted de Corsia, Charles Buchinsky, Ned Young) seeks help from a former convict (Gene Nelson), now a parolee with a loving wife (Phyllis Kirk), a good job and a decent home. The ex-prisoner wants nothing to do with his old life, but circumstances quickly coerce him into helping his erstwhile acquaintances. Hot on his trail, though, is the most ruthless and unforgiving police detective (Sterling Hayden) the city has. Caught between the cop and the crooks, an innocent man will have a hard time surviving. 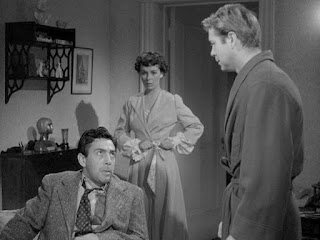 A tough and tense film, Crime Wave is a late entry into the era of black and white film noir – but better late than never. It has all the elements of a good example of the genre. The writing is lean and terse; there are few extraneous lines, certainly none spoken by the main characters. What we learn about Nelson comes from the police and the criminals discussing him; what we learn about Hayden is that he’s given up smoking. 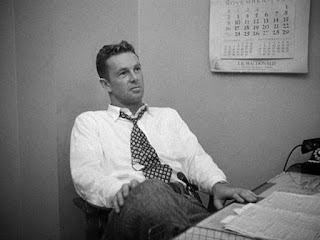 The acting is very good. The stand-outs are, predictably, Hayden as a cop who comes as close to being despicable as one can without being an actual criminal, and Nelson, who, while not really exuding warmth and charm (his situation, squeezed between law and disorder, rather precludes this), nonetheless makes us wish everyone would just leave him alone. But all are convincing here. De Corsia is a smooth villain who gives the impression that he would let bad things happen, rather than commit them himself, and Buchinsky – better known later as Bronson – is the one he’d let do them. It’s interesting to see how the two actors each convey a different sense of menace. Jay Novello is a former doctor, now a veterinarian, so low he rifles the pockets of a corpse for money – but compassionate enough to refuse to put down a dog the owners of whom don’t want anymore. 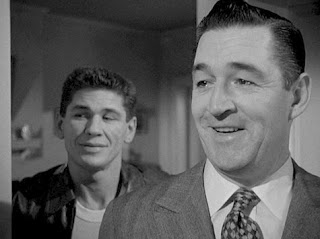 Familiar faces may be seen in Dubb Taylor (he later dropped one the B’s and became a western-film character actor) as the gas station attendant, and Hank Worden as an airport manager.

De Toth makes fine use of Los Angeles locations, and the expansiveness of the city as compared with, for instance, the canyon-like streets of New York, is ably depicted. He creates real tension in a number of scenes, such as the invasion of Nelson’s home by the criminals, and the climax. The whole movie provides suspense in the question of what will happen to Nelson and Kirk, especially since both sides of the law are after them. The denouement offers a surprise. 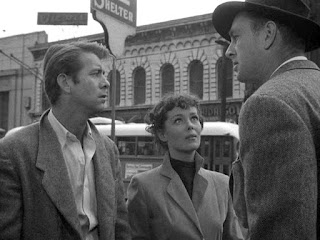 Though film noir continued into the age of colour movies, it lost something in the transition. The monochrome process itself was a component of the genre, recording a world that was gritty and harsh. Crime Wave shows why black-and-white photography continued to be used for film noir so long: a low-budget picture with a hard, unsentimental story that will satisfy.
at February 02, 2020