Directed and produced by Otto Preminger 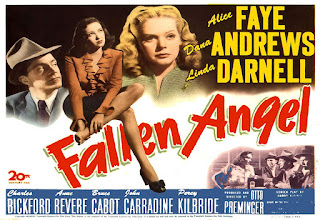 A smooth-talking drifter (Dana Andrews), out of money, stops in a small Californian town. There, he becomes almost immediately enamoured of a diner waitress (Linda Darnell) and concocts a scheme to defraud another woman (Alice Faye) of her life-savings, so that he and his new infatuation can run away together. But no criminal enterprise goes as planned and obsession, fraud, homicide – and revelations of character make things interesting for all concerned. 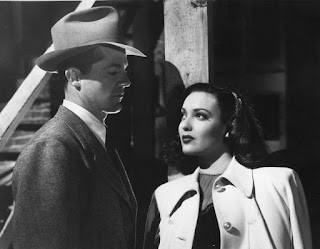 Fallen Angel was widely seen as the director’s follow-up to the very successful Laura, of the previous year, starring the same leading man. Fallen Angel doesn’t reach the same heights. But even so, it stands very well on its own merits. Initially the story of a larcenous enterprise reminiscent of Double Indemnity, a murder changes its direction; while a surprise, the death is not inconsistent with the plot, or the atmosphere. 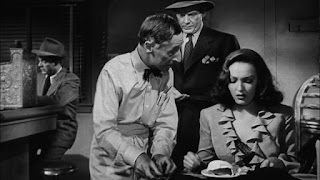 Andrews gives his usual solid performance, believable, even though he is on the wrong side of the law this time. Darnell portrays her character intriguingly: somewhere inside the tough-talking dame is a little girl, almost willing at times to be taken in. Her voice changes when she looks at people and events innocently. The other actors are up to the grade, too: Charles Bickford, as a retired New York City police officer, keeps the viewer guessing as to his real personality; Faye does what she can with the straightforward role she is given (much of her work was edited out), and lesser parts are filled admirably: John Carradine proves that even as a youngish man, he was born to be old. Dick Haymes, the very popular 1940s crooner, provides the uncredited vocals for the jukebox song, while Matthew Beard – Stymie, from the Our Gang films – has a bit part as a shoeshine boy. 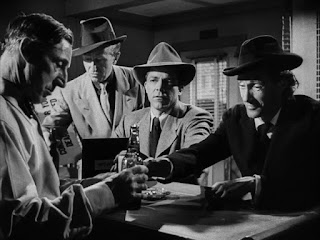 The direction is as one would expect from Preminger in his prime. Little is given away at the beginning. A smile here, a shadow there, give hints as to what is really happening or being thought. At the start and at the end, the movie turns out to be more black and white (no play on words intended) than it seems in the middle, but that doesn’t detract from it. 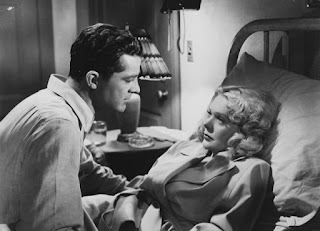 The story is one of obsession, and if Darnell may not be everyone’s idea of a woman many men would worship, then that is symbolic of obsession. Her character, portrayed well, with her hopes and ambitions and fears, is nonetheless one of a million, rather than one in a million, yet becomes the centre of numerous men’s desires. Who can say why or when an obsession will take hold – or when it will be discarded? Fallen Angel shows that such longings are not always permanent, real perhaps but, if deep, then deep in an unhealthy way. Those who shake them are the lucky ones. 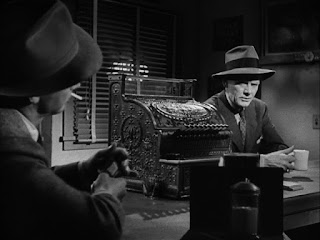 A good example of minor film noir that should not really be considered minor, Fallen Angel is recommended viewing for a devotee of the genre, a fledgling movie buff or simply someone who wants to see an entertaining crime story.

(As an addendum, check out the difference to the image supposedly of Linda Darnell in the three posters illustrated here. The one at the head of the review looks like her; the others veer so far from her likeness as to be someone else, even though Andrews and Faye are still recognizable. The last one makes the characters look like they are in an MGM musical.) 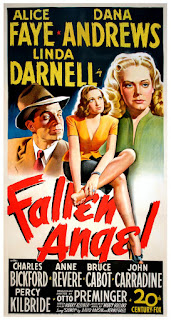 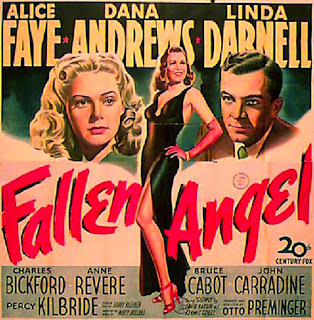